Raise your hand if you ever gotten enthusiastic about your fitness and bought a stability ball!

Raise your hand if you ever used your stability ball.

Yep, I’m guilty of it too! I bought a pink stability ball back in the day, and never, ever used it. I mostly just rolled it around my apartment to move it out of the way, until I finally gave it to my little sister — she was 7 at the time, and loved it!

Recently, though, I noticed my in-laws had a stabiity ball, hiding off in the corner of their guest bedroom, and I got inspired! I pulled it out, did some research and found tons of really challenging exercises to do with it!

A few things to note before diving in:

+ Stability exercises add a new element to fitness! They make a simple movement, such as a push-up more difficult because you have to move and balance your body at the same time. This requires you to activiate your core and squeeze your butt — all good things! In fact, when you have to *stabilize* you engage more muscles and burn more calories! That’s a win!

+ Stability exercises also improve coordination! They force you to be aware of your entire body, down to the tips of your feet! (One reason why the booty lunges I tried to do with the ball aren’t pictured — balancing was nearly impossible!)

+ Not all of these movements are as easy as they look and sometimes, it took 2 or 3 tries to get it right! I would suggest shutting off the TV and going someplace private (if possible) to do these, so that you can concentrate! Music may help too!

+ Take your time. This isn’t a race. Most of these movements are better done slow. I usually like to plow through workouts, going as fast as I can, but with this, it’s better to go slow and really contract your muscles.

+ I am not a fitness model. #thatisall

Pikes: Great for the core! Lock out your arms and then, using your abs and legs, bring the ball toward your midsection, while hoisting yourself into a v-position. Hold the v-up for a single count and then lower slowly.

Push-ups: With these, be careful not to drop your midsection – try to keep everything tight and locked, coming up from your push-up in one fluid motion.

Tucks: If pikes are impossible, do tucks instead – they’re easier! Rather than hoisting your midsection into the air, simply tuck your knees into your chest and then slowly straighten your legs back out.

Around-the-World Circles: These are tough! Rest your forearms on the stability ball and clasp your hands together. Tighten your core and lock your body in an incline plank position with feet hip-width apart. Then, using your forearms roll the ball into a “circle,” going right, forward, and left, while keeping your body as stable as possible.

V-Passes: These are actually really fun and beat boring ole’ crunches! Lie flat on the ground and place the stability ball between the grip of your feet. While keeping your legs straight, raise the ball into the air, situp, grab it with your hands, and then lay back flat. Now pass the ball hands to feet mid-air and lower back down.

Other stability ball exercises to try:

+ Single-Leg Bridge Lifts: This is a great movement for strengthening your quads and hamstrings, and stretching your hip flexors. You’ll want to keep both legs straight as possible and do 10-15 reps on each side. (Remember to try to keep the ball in place during these!)

+ Shoulder Taps: OMG – the burn! These are hard! You’re going to feel the burn throughout your abs, obliques, and shoulders! Do them slow, keeping your hips square to the floor (which is easier said than done), and alternate right hand to left shoulder, left hand to right shoulder. Get in as many as you can stand!

+ Just Plank It: Planks are great and when you add a stability ball, and that balance factor, they’re even better. If you can’t get pikes or tucks, or just want to keep things simple, get horizontal and hold a plank! 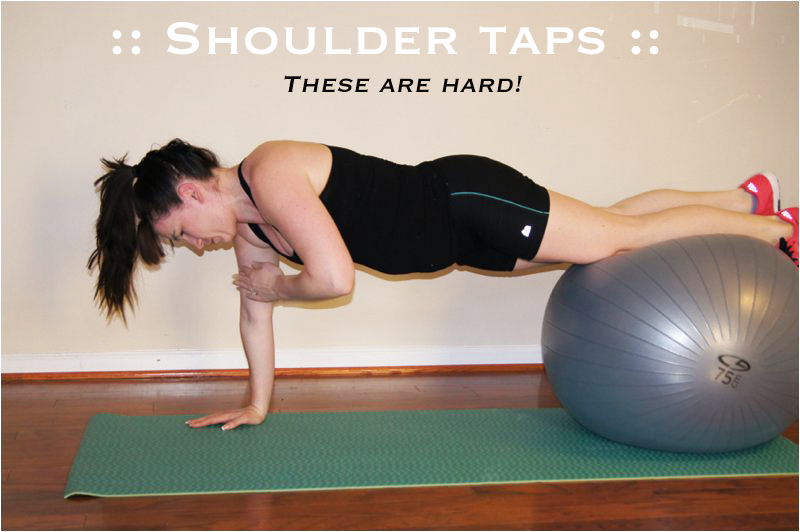 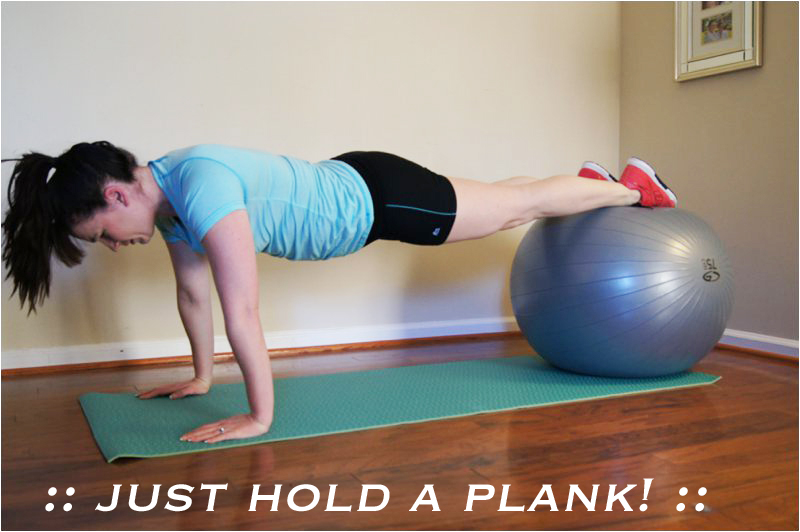 Most importantly, have fun! Whatever you do, don’t get frustrated if you can’t hold the position, just try, try again! I fell off the stability ball more times than I can count and “holding” for shots was nearly impossible, but I definitely got in a workout, and that’s what counts… And, no judging here if by the end, you’re just hugging and rolling around on the ball! Weeeeee!

Do you have a stability ball at home?

Do you use it? What are your favorite stability ball exercises?