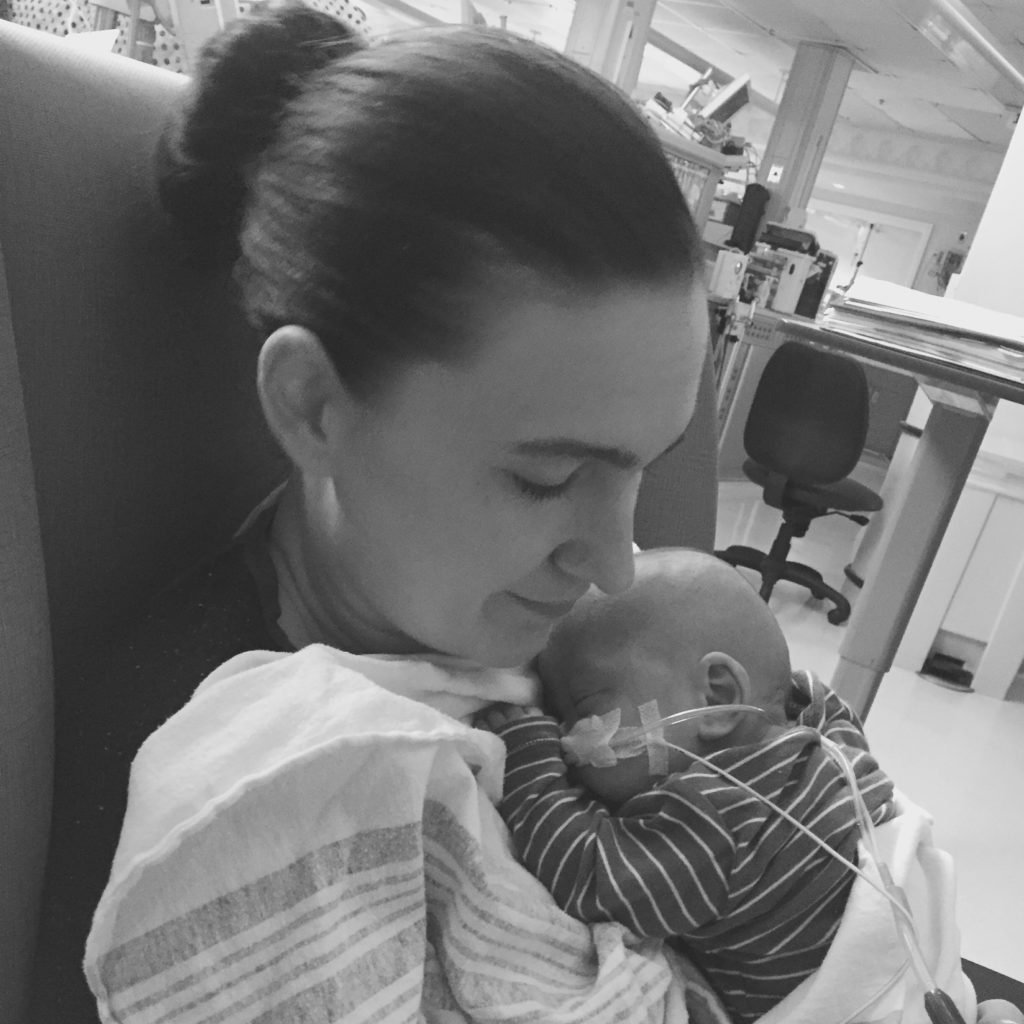 “Sweet boy, you are more than we ever expected,

and better than we ever imagined.”

If you’ve been following along JR’s journey, thank you. Writing this series has been really therapeutic for me and I’m energized to be over the hump of Part II, recounting our scariest days.

I’ve talked a lot about turning points in the NICU. There was the first week (big turning point), first hold, then the first month and all the subsequent steps forward — an open crib, clothes, and probably most significant, graduating from the ventilator to a nasal cannula. 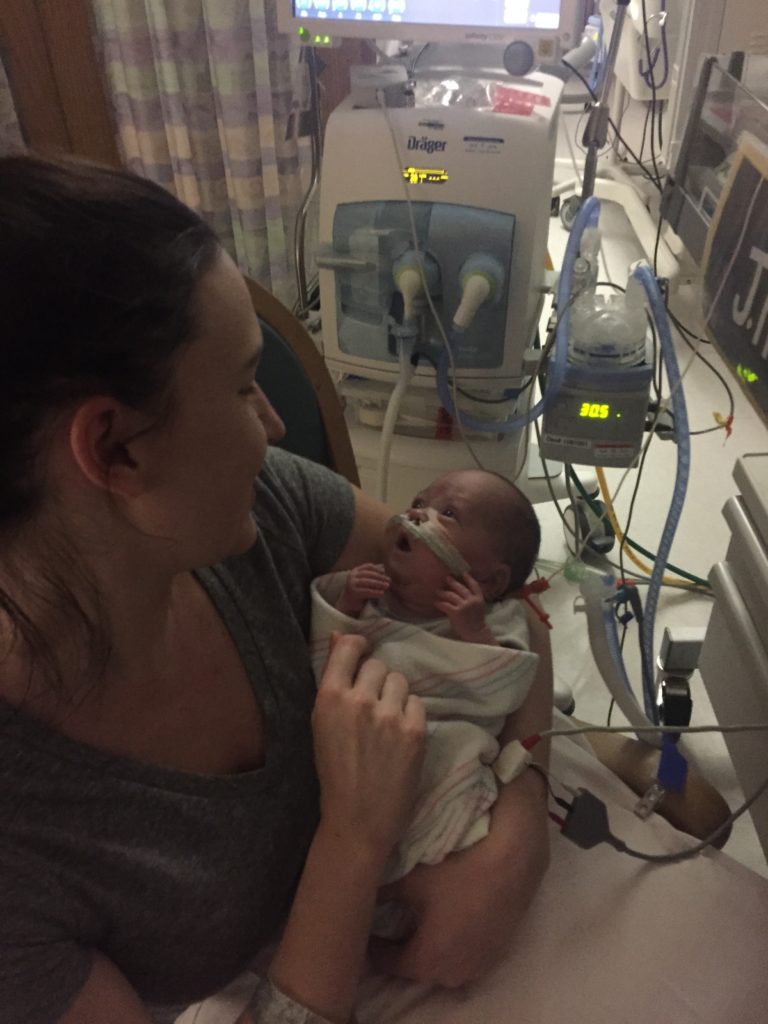 There were a lot of little and big turning points in the NICU, but the one that stands out the most in my mind was what I want to share about today: all those snuggles, near the end of our NICU stay when the weather was brisk and the sky was dark by 7.

JR came off the ventilator in September. It wasn’t an easy road, by any means — he was prone to “brady” which is when your heartrate suddenly drops (terrifying to see; alarms sound; nurses come running), but he had filled out some, too and weighed upwards of 8 lbs at this point. I’d toughen up by September as well. I knew the drill if a brady occurred: you’d sort of shake JR to ‘wake him,’ and slowly, his heartrate would resurface. 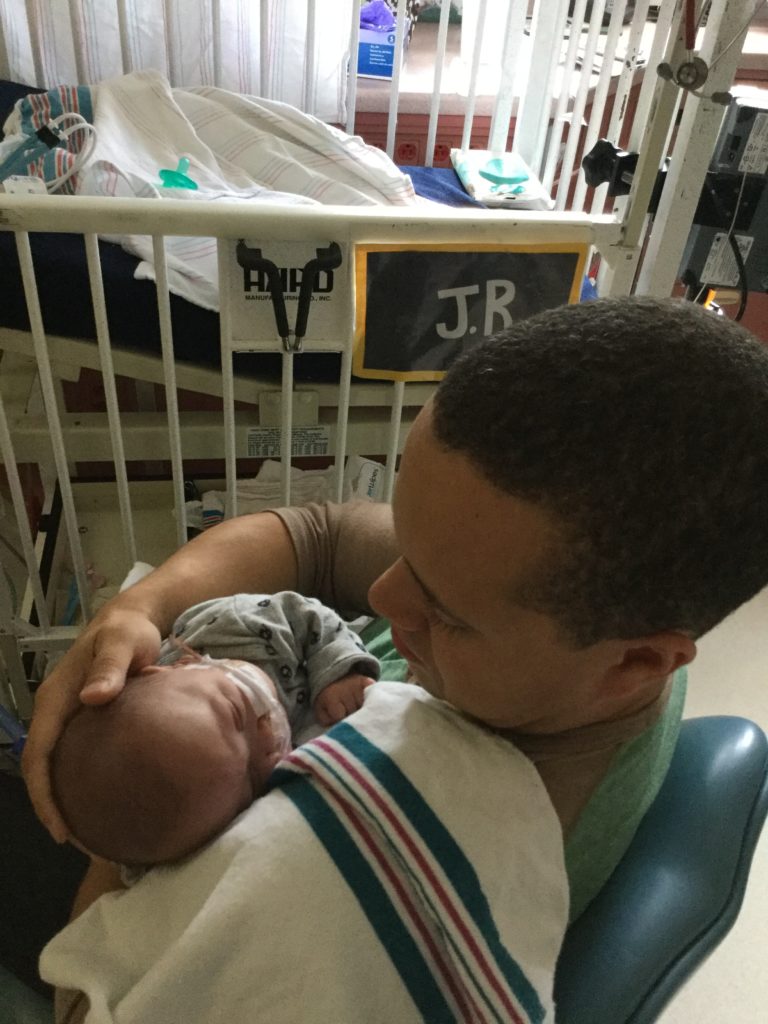 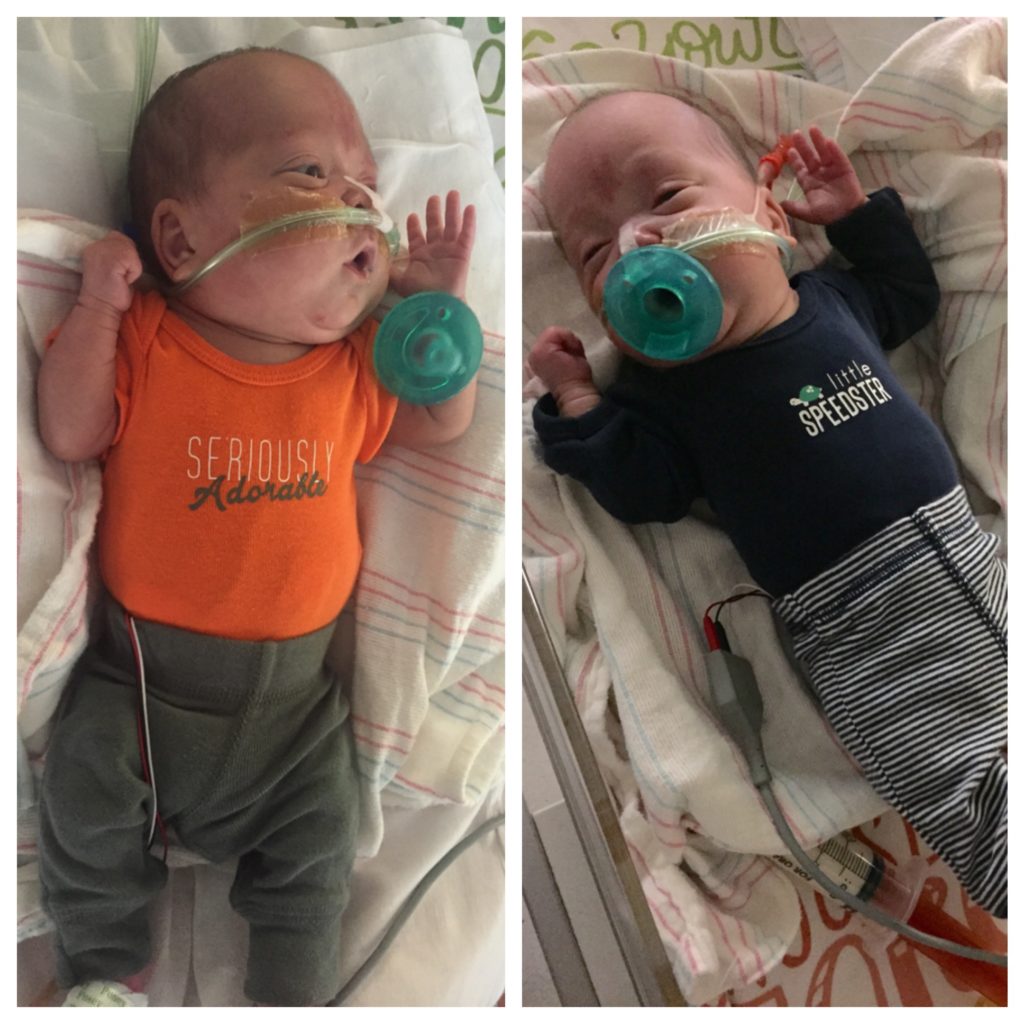 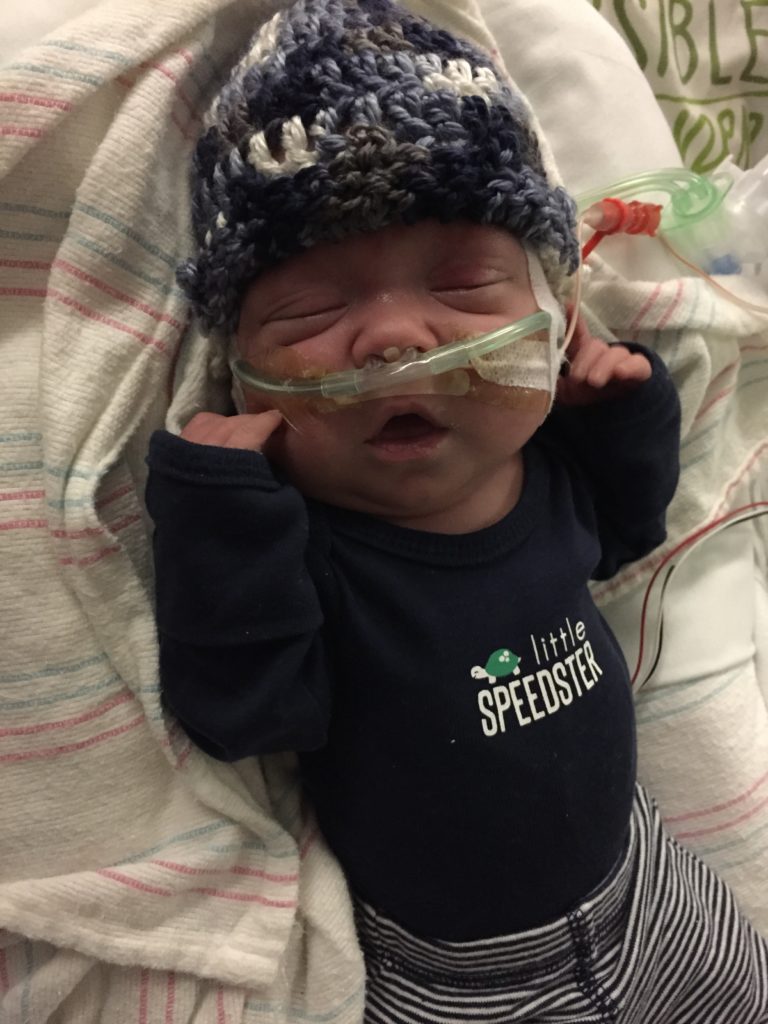 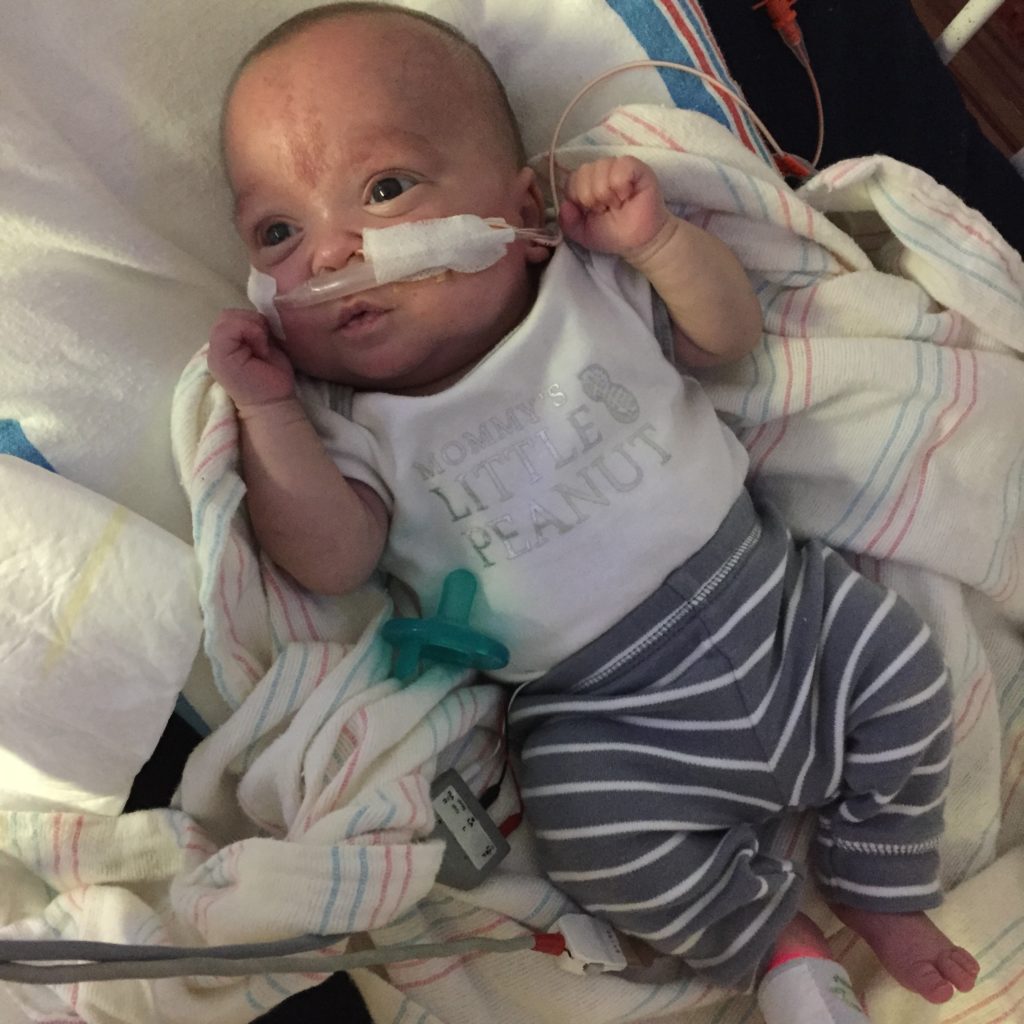 I’d been a student of the nurses for 4 months now and was pretty good at imitating them. Plus, I was JR’s mom. I’d been through hell and back with this kid. I knew him so well and that motherly instinct kicked in all the time.

It’s funny I started really feeling like a mom at this point — when I could walk in the NICU and swoop JR out of his crib (there was only one cord to worry about now – his oxygen), and I’d sway or bounce with him on my hip.

I’d pull up a rocking chair and cuddle him for hours on end — until my butt hurt!

He was a sleeping a lot, like I imagine a newborn does. I didn’t mind being his pillow at all. The closeness we were finally able to share, sans ventilator and IVs, was so good for both of us, like a season of healing and resting from the fighting we’d done the weeks prior. 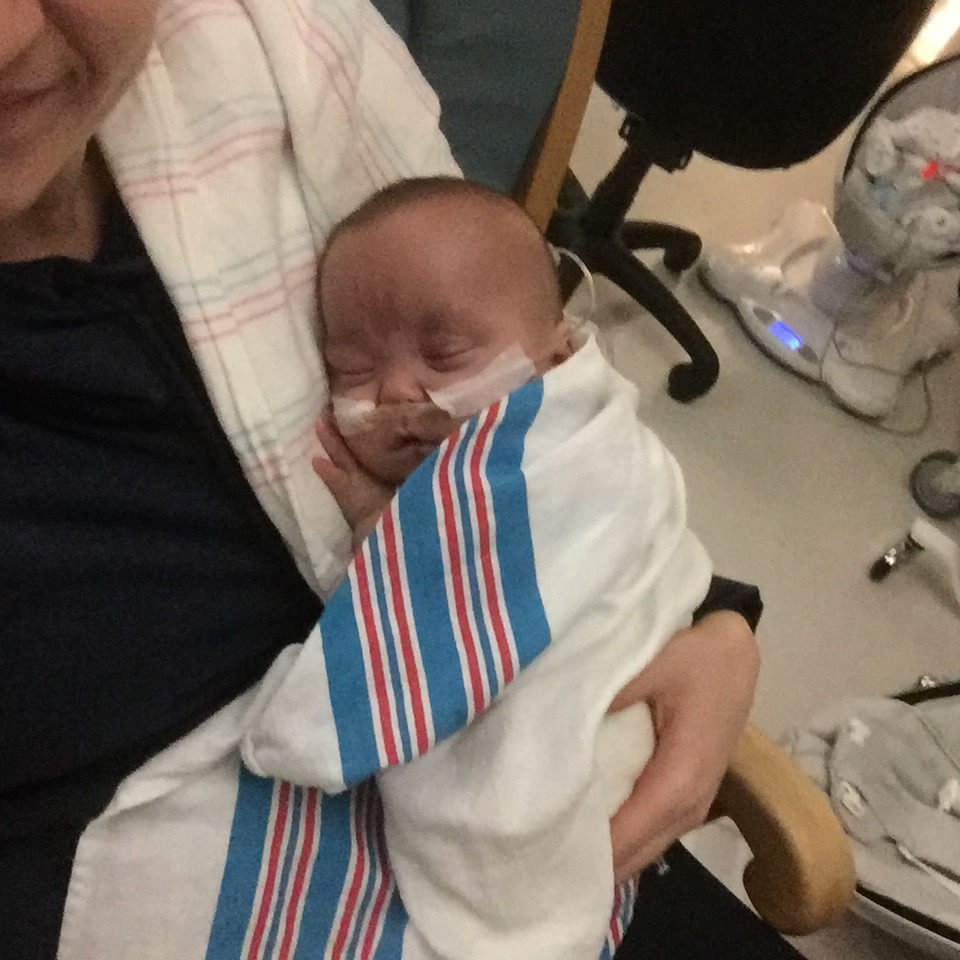 That’s when JR started to feel like my baby.

I could cry reflecting it on it now because it was this beautiful, pivtol turn in the NICU when I started to see our life beyond this place. It started to feel like we didn’t belong there. Like we might finally get to go home.

Before this point you couldn’t entertain such thoughts. You had to put “home” in this box of distant dreams, you could hope it would happen but there was no way to even imagine it in those early days.

That fall I met another NICU mom who was situated right next to us. My dear friend Keia! Ironically she worked in the hospital too and we instantly clicked.

Everyday around 5:30 we’d come to the NICU after a long day’s work, pull up rockers and hold our little guys — sharing stories and worries about the next big hurdle or things we could be proud of: no bradys today, or an ounce gained! We’d sit across from each other and shoot the breeze while the babies slept nestled on our chest.

They slept and slept as we rocked and talked, and it was glorious. 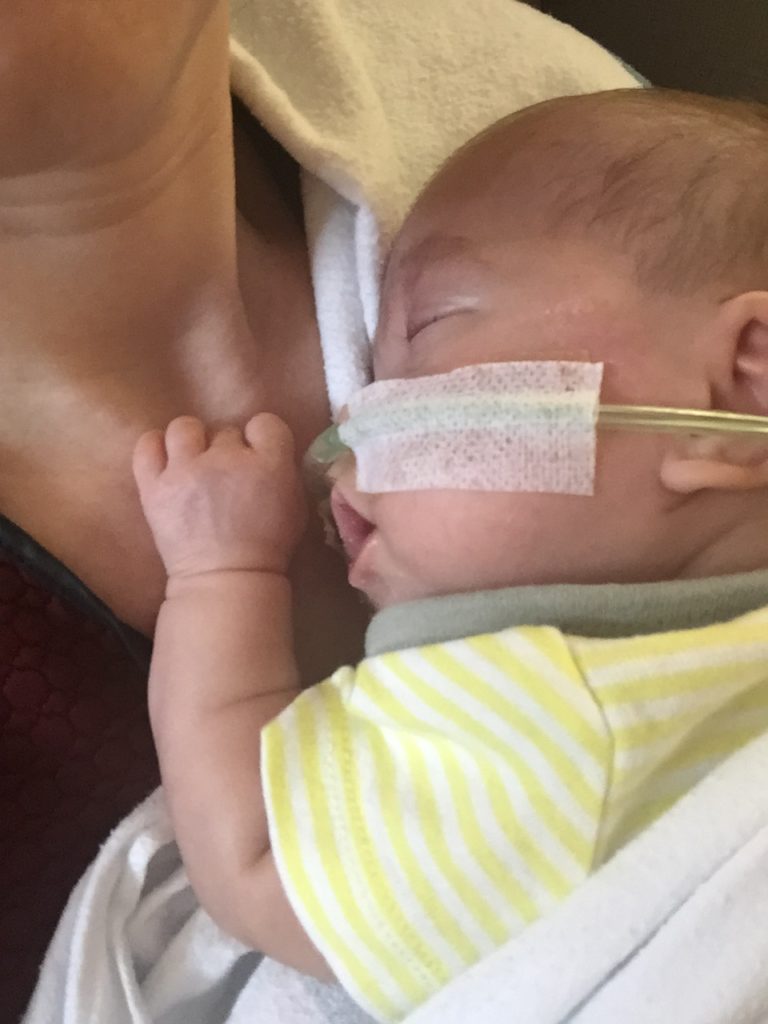 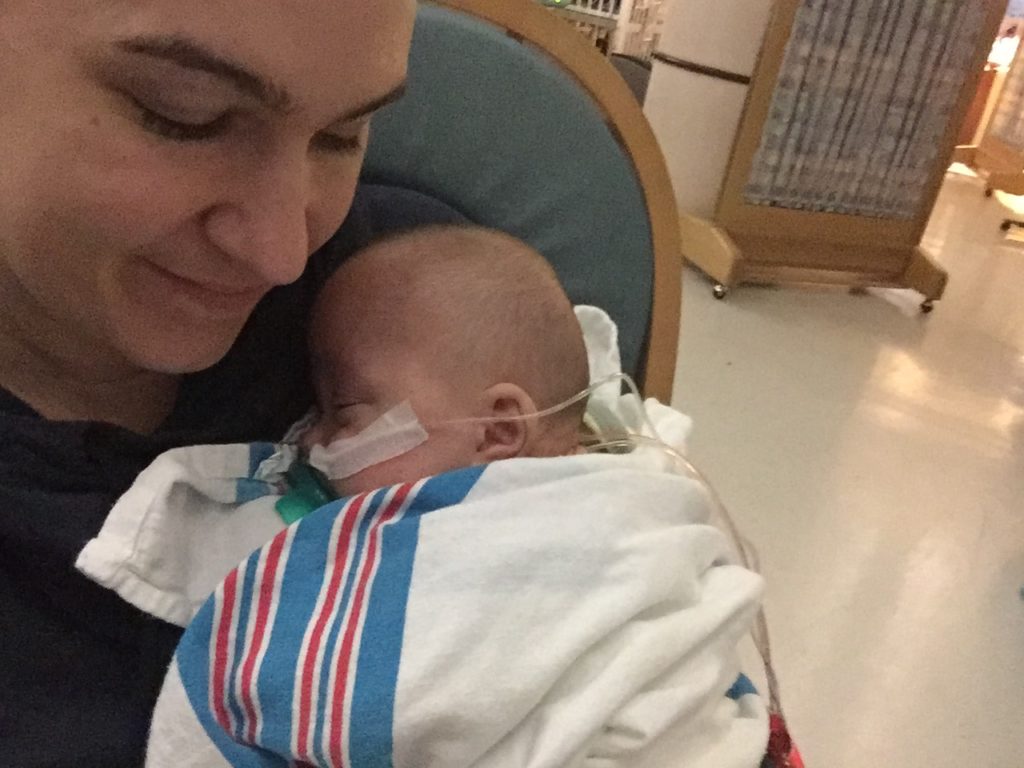 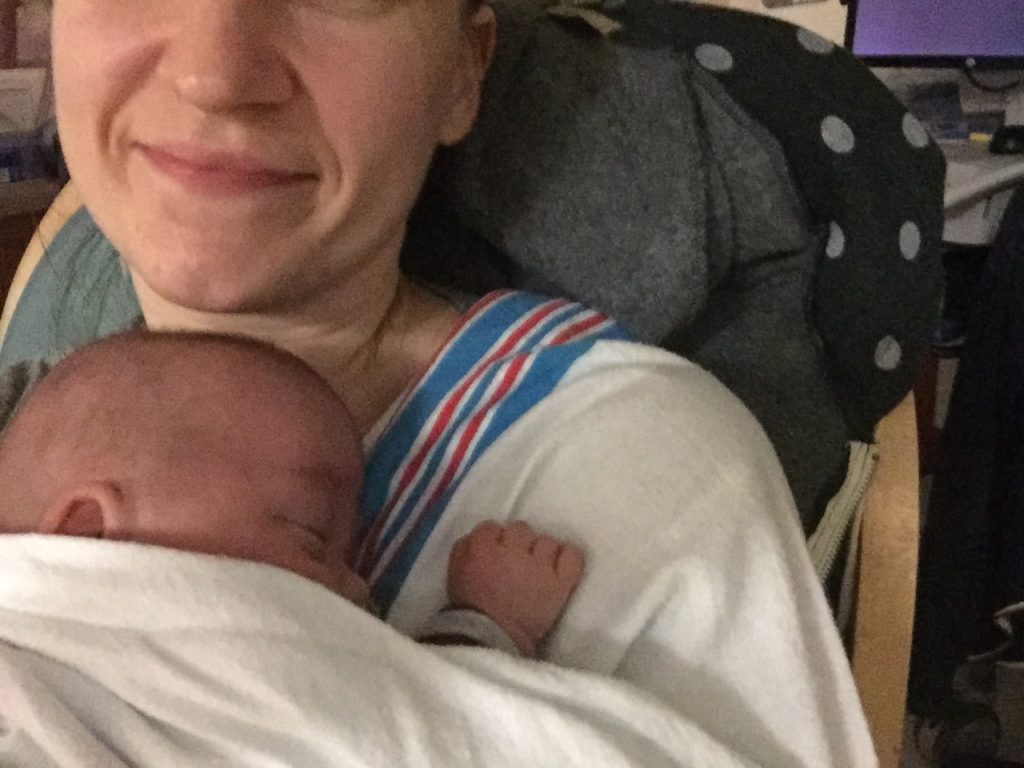 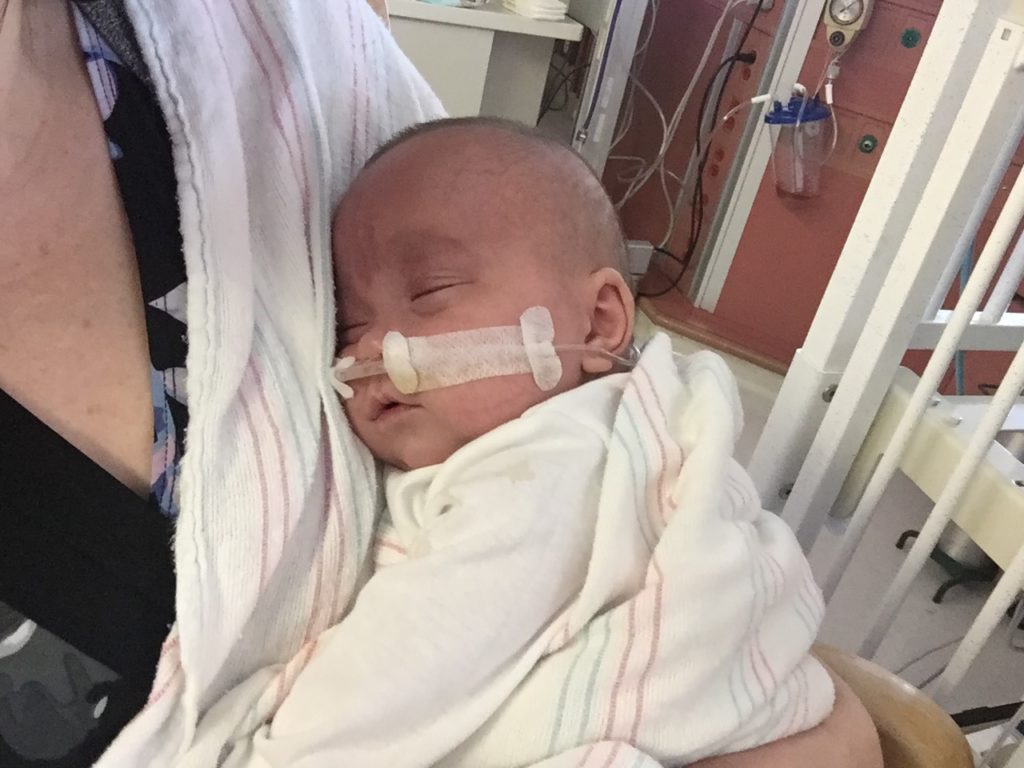 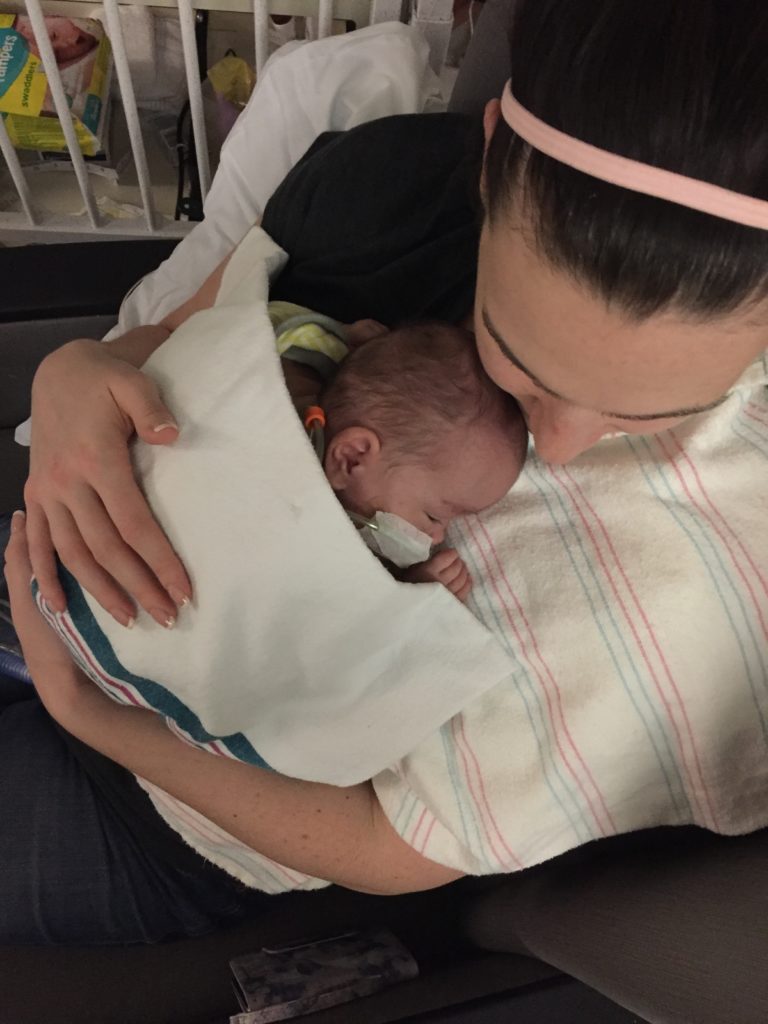 At 7pm when the nurses kicked us out for shift change, we’d go to the hospital gift shop to load up on snacks: Cheez-its, M&Ms, and other crap; then wait until 7:45 from the family room down the hall. We’d talk about the nurses, the doctors, upcoming procedures, pumping (God bless Keia, she was still pumping!) and speculate about what life beyond the NICU would be like; anything would be better than the NICU, we agreed!

When I think back on it, I was so incredibly lucky to have a friend like Keia to share the highs and lows. Our kids were very different but were facing the same uphill battle out of there: eating, breathing, growing. We were devoted to making it happen and became each other’s cheerleader along the way.

As visits from family dropped off and the rest of the world seemed to forget your kid was in the hospital, we had each other to lean on and God-willing, get out of there. We both had baby showers in October since we didn’t have a chance to have them before giving birth and we both hurried to get a nursery ready. The time was near.

Keia was a great support during feeds as well. As I mentioned before, eating and breathing simultaneously is a really tremendous task for micropremies. It’s the mastery of suck, swallow, breath that’s really hard to coordinate and can be dangerous — most of us know how uncomfortable it is to cough with a mouthful of liquid (mid-swallow), there’s risk of aspirating, choking; lots of scary things.

We had speech therapists come to the NICU to facilitate feeds, offering tips and monitoring progress. You could leave it up to them to give your baby a bottle but as a mom, you wanted to be in there and assess for yourself how things were going.

JR wasn’t great at taking a bottle at first. He’d nod off to sleep and not want to eat or cough and brady, so feeding him wasn’t fun. In fact, it was quite terrifying! We started with sidelining, holding him in a football position and administering the bottle from a side angle, which made choking less of a hazard. Keia was often in the rocker next to me, spouting off words of encouragement and praise at those first few feeds. 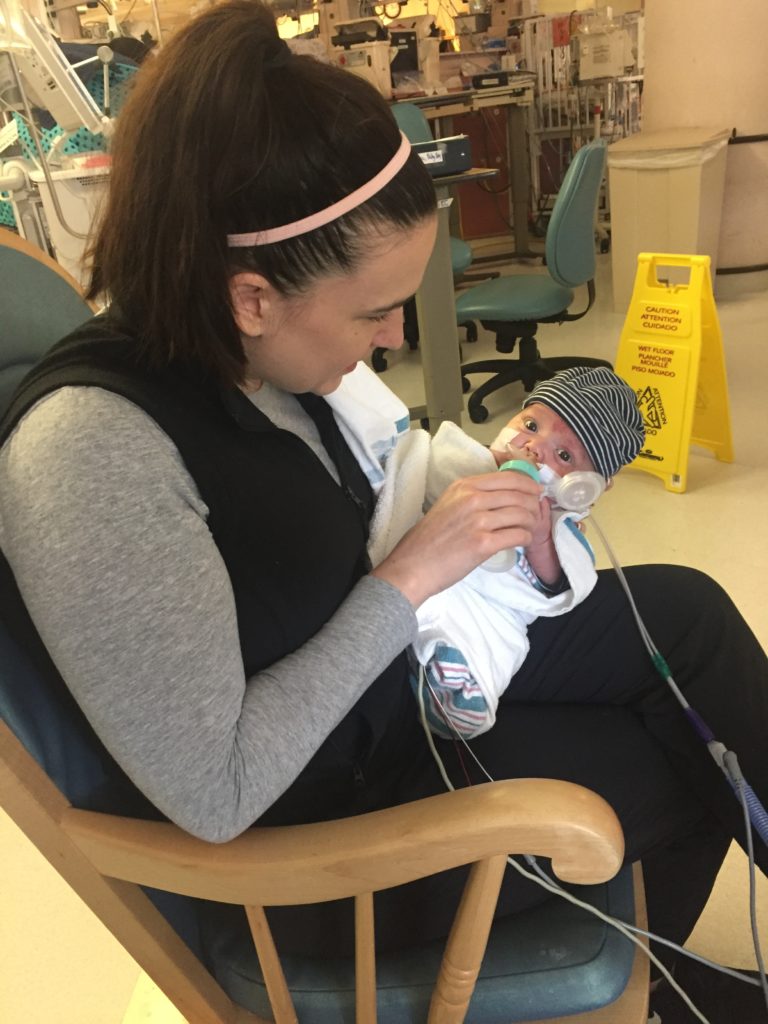 Figuring out the bottle took forever and as we made progress, new problems arose: primarily reflux, which is fairly common among micropremies but a hurdle nonetheless. Reflux would rear its head after feeds, when JR might wake up coughing or randomly brady. It was a grave concern because without a means for safely eating, JR wouldn’t survive outside the hospital setting. At this point discussions of a g-tube arose — a mechanism to receive nutrients through an entry point in the stomach.

By mid-October Keia’s son was ready for the step-down unit (critical care nursery 2), across the hall from CCN1 (where all the babies go at first), but I wasn’t at all sad to see her go. Seeing your dear friend heading towards home was so beautiful and so encouraging; we knew we weren’t far behind her. It gave me energy and determination to do whatever we needed to in order to cross that finish line. This had been a marathon after all.

We discussed the g-tube with JR’s care team and everyone was in agreement that we give him more time (and at least for the time being, opt not to have the surgery). Except me. I wanted the g-tube if it meant going home. I was ready, by any means necessary.

Thankfully Aaron convinced me otherwise and we waited it out. JR began taking full bottles and bradys became less frequent. I was administering the majority of feeds at this point (every 4 hours in the NICU), so the nurses and doctors could see we had a handle on this.

At the end of October, we kissed Keia and Jace goodbye and boo-hoo cried for them. Not at all out of envy or grief but for sheer thankfulness they’d made it out.

Also knowing, we were next.

This is a series about our son, JR who was born 16 weeks early weighing 1 lb 12 ounces. He spent five months in neonatal intensive care and is lucky to be alive today. We are so very VERY blessed by him and his triumphant story.

Thank you for reading it!